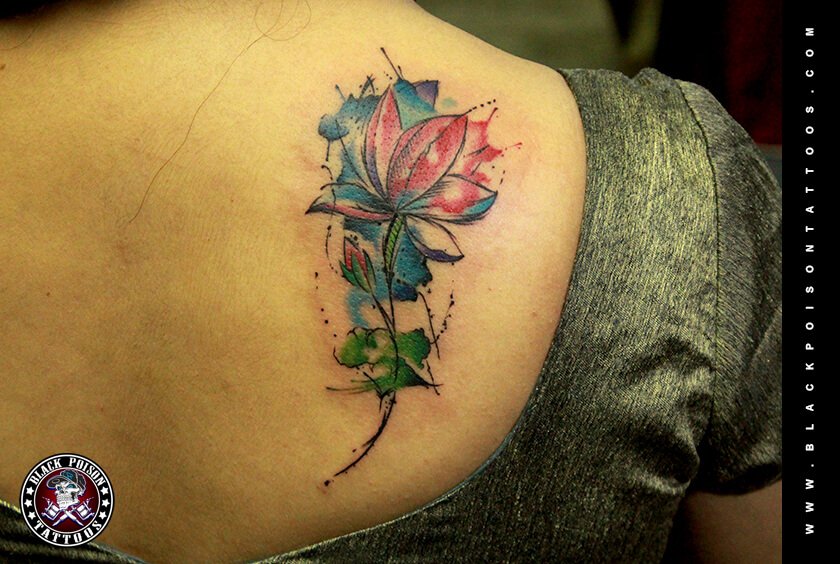 Watercolour lotus tattoo designs are widely preferred by tattoo lovers all around the world. Popular amongst both, men and women, lotus design is not only revered for its beauty, but also reflects a deeper spiritual meaning. The flower grows in muddy water, yet symbolises purity and harmony. As a tattoo design too, lotus stands for the same attributes in human nature and depicts the thoughts and attitude of the bearer. Aside from the Victorian and contemporary meanings for the Lotus, there is a wealth of symbolism tying these flowers to Hinduism, Buddhism, and the ancient Egyptian’s religious practices.

The ancient Egyptians used the plant extensively as a symbol in the paintings. And carvings left on the walls of temples and tombs. Scholars believe the Egyptians viewed the Lotus as a symbol of rebirth. Because it appeared to sink at night and rise again in the morning. It is the plant simply loses old blooms and adds new ones on a daily cycle, but it is still a potent reminder of reincarnation and the mysteries of the afterlife. The priests and other religious leaders also brewed the flowers to make a tea with sedative and mild psychotropic effects, which heightened their sense for ritual work.

Buddhism Culture – According to Buddhist religion, lotus defines purity and piousness of the soul,Patience,Mysticism,Direct Spiritual Contact,Emptiness from Desire,Victory over Attachments,Enlightenment and the Bodhi State,Love and Compassion for All Things,Self-Awareness,Faithfulness During Spiritual Development,Rising Out of Suffering as the flower grows in a muddy area, yet maintains its purity. The belief is based on the fact that you will find a perfectly complete miniatures lotus plant within a seed. Which implies that even a human being is born complete and yearns for perfection through his journey of life.

Also, Buddhism has meanings for various colors of lotus flowers, as a red colored. Lotus stands for the heart, which implies love and passion.

Similarly, a pink lotus represents devotion towards the divine, while a blue one stands for learning and intelligence. A white colored lotus implies purity and peace, both at spiritual as well as intellectual level. The Buddhist mythology says that the Buddha was born from this pure flower and had a white heart. Which represented his pious soul. Just as a lotus sheds its flowers and seeds together. It signifies a noble soul which guides the other souls on the Earth along the path of Nirvana.

Egyptian Culture –  The ancient Egyptian cultures sees lotus as a symbol of the beginning of life and reincarnation, as the mythology of this culture narrates that origination of life on earth was marked by the blooming of this mystical flower from the sea.

Chinese Culture –  The Chinese culture sees lotus as a flower with perfect beauty stands as a source of inspiration for poets and artists. Since times immemorial.

Western Culture – The Western culture has a similar kind of reflection of this charming flower. Because it denotes new beginning and rebirth as it reflects divine conception. It also links lotus flower with the search of true meaning of life.

The Lotus meaning in Hinduism is a little different.Brahma, the ultimate creator, emerges from a Lotus as well. This sense of purity arises from the flower’s growing. The habit of rooting in mud and pushing up through the water to bloom.