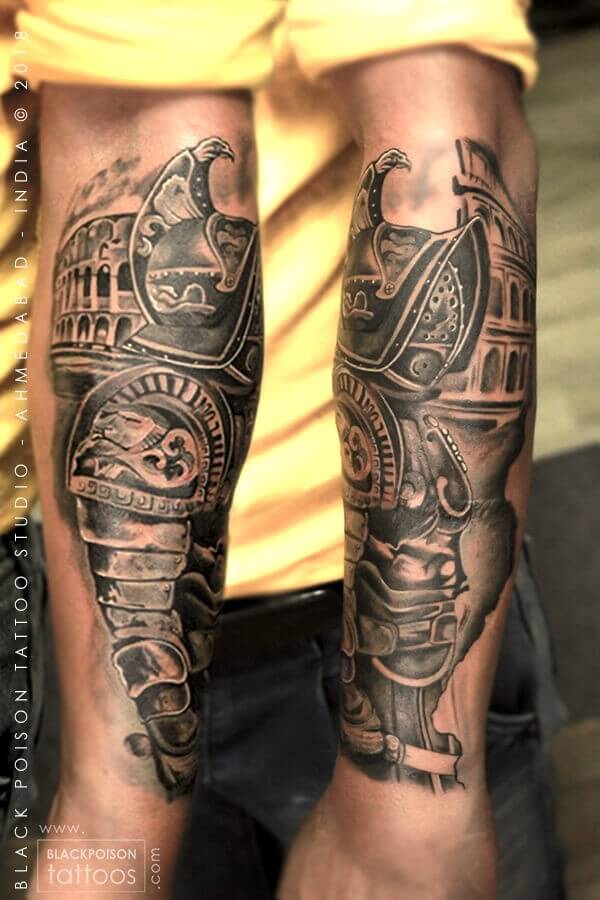 Meaning of the Gladiator Warrior Tattoo for men is quite obvious, and it is known to every young man who once watched the eponymous film with Russell Crowe. The word itself derives from the Latin word “gladius”, which is translated as “sword”.

In those distant times, gladiators were enslaved people, slaves or soldiers and criminals taken prisoners during the battles. All of them were previously taught how to handle the sword correctly.

As soon as gladiators got the necessary skills, they were confronted with each other. Such massacres resulted in the death of one of them. The bloody battles in Ancient Rome had been held in arenas for seven hundred years. At first, the Romans preferred to arrange such fights on holidays.

They wanted to satisfy the cruel god of war Mars in such a way. Over time, they began to hold such battles for entertainment without much reason. The Romans borrowed offering up sacrifices in the form of gladiatorial games from the Egyptians, Etruscans, and Greeks.

Some gladiators were volunteers who risked their lives and their legal and social standing by appearing in the arena. They were celebrated in high and low art, and their value as entertainers was commemorated in precious and commonplace objects throughout the Roman world.

The war in Samnium, immediately afterwards, was attended with equal danger and an equally glorious conclusion. The enemy, besides their other warlike preparation, had made their battle-line to glitter with new and splendid arms. There were two corps: the shields of the one were inlaid with gold, of the other with silver …

The Romans had already heard of these splendid accoutrements, but their generals had taught them that a soldier should be rough to look on, not adorned with gold and silver but putting his trust in iron and in courage …So the Romans made use of the splendid armour of their enemies to do honour to their gods; while the Campanians, in consequence of their pride and in hatred of the Samnites, equipped after this fashion the gladiators who furnished them entertainment at their feasts, and bestowed on them the name Samnites