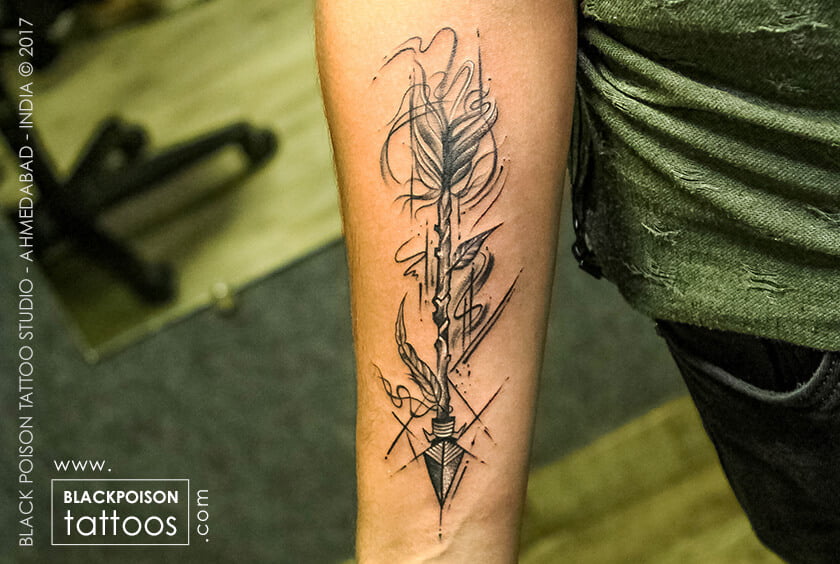 Like all other tattoo designs, the arrow tattoo too has its own symbolic meaning, which needs to be understood before one opts for this tattoo. In the Native American culture, the arrow is considered as the weapon of protection and hunting, which has been used to safeguard one’s family as well as sustain them by making provision of food for them.

In this culture, two crossed arrows also depict friendship, which is the reason why this symbol is a popular tattoo design for a friend.

The bow, which stands for struggle in life, pulls one back but the arrow gets itself released from the bow to propel forward and seek better things in life.

In other words, an arrow stands for achievements of one’s goals in life by overcoming all hardships. In the zodiac, a bow and an arrow stand for the astrological sign of Sagittarius.

It is also considered as the symbol of masculinity, strength, power, and sense of direction. It is about moving in only one direction, which is forward, without looking back in life.

An arrow tattoo is mostly in black simple lines. Though colors may use in some cases depending upon the choice of the bearer. Basically, it is the size of the tattoo which determines its placement. A small sized arrow tattoo can be inked on the wrist, ankle or finger, while a medium to bigger one can be done on the side, back, shoulder, chest, arm, thigh or leg. The prolonged shape of this kind of tattoo also makes it ideal to place along the spine.

Arrow tattoos come in different designs, out of which one can choose a design. According to its deeper symbolic meaning as well it’s aesthetic value. Here are some popular arrow tattoo designs:

Some other tattoo designs in arrow tattoos incorporate these arrows with elements.

which takes a person on the path of success in life.

An arrow can also do along with a compass or Nautical Star for representing direction. Another popular arrow tattoo design feature a bow with an arrow strung on it, ready to shot.

Arrow tattoos were originally based on Native American tribal life, hundreds of years ago.

The arrow represented an essential tool in hunter-gatherer communities, serving as a weapon in hunting and in war. Though a simple design, this symbol is extremely popular because of the powerful, positive meanings associated with it.