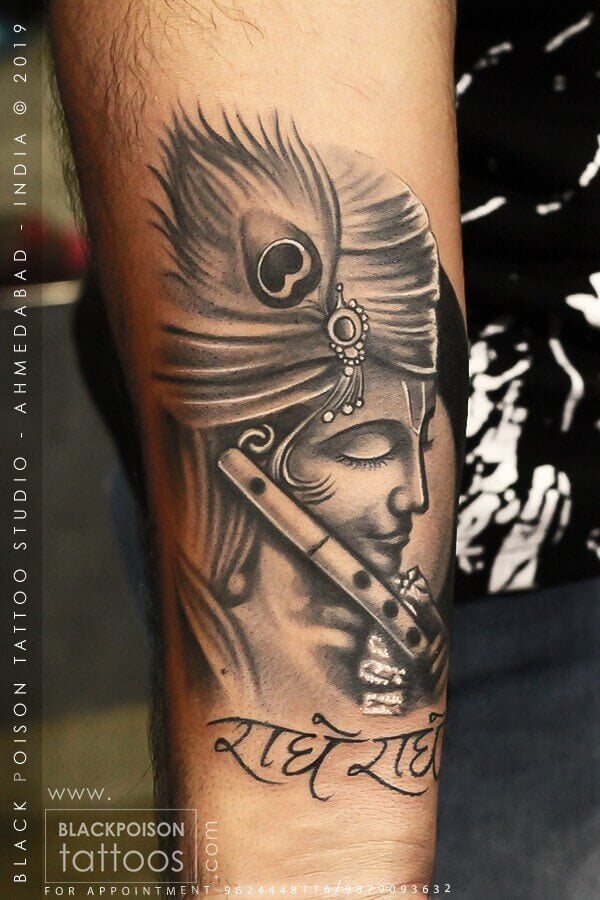 Lord Krishna, the eighth avatar of God Vishnu is worshiped as a supreme God in Hinduism. Born in northern India (around 3,228 BCE), Lord Krishna’s life marks the passing of the Dvapara age and beginning of the Kal yuga (which is also considered as the current age).Krishna Tattoo

References to Lord Krishna can be found in several Hindu mythological books, especially in the epic Hindu book, the Mahabharata.

Lord Krishna is also described as an important figure in the Bhagavata Purana. This is another Hindu epic book that dates to the 10th century B.C. In the text, Lord Krishna is described as the charioteer for the warrior Arjuna who had guided him morally and gave military counsel to the leader.

The ruler of Mathura, Kansa was one such evil king. He had a sister named Devaki, who was married to Vasudeva. The day Devaki and Vasudeva got married, a voice from the sky forecasted that Devaki’s eighth son will bring an end to Kansa’s rule and will kill him.Krishna Tattoo

Frightened Kansa held the couple. He then vowed that he will kill every child of Devaki and Vasudeva. Seeing their first seven children being killed by the cruel Kansa, the imprisoned couple feared giving birth to their eighth child.

One night Lord Vishnu appeared before them.

He told them that in the guise of their son, he will return and rescue them from Kansa’s autocracy.

The divine baby was born and the day he was born, Vasudeva found himself magically freed from prison. He ran away with the infant to a safer house and Lord Vishnu removed all the obstacles from Vasudeva’s path.

Vasudeva reached a house in Gokul, exchanged Lord Krishna with a new born girl of Yashoda and Nanda and returned to the prison with the girl child. As soon as Kansa came to know about the new-born, he again tried to kill the child. The infant ascends to the heavens and transformed into the goddess Yogamaya and said, “O foolish Kansa! What will you get by killing me? Your nemesis is already born.”Krishna Tattoo

Meanwhile, Krishna was raised as a cowherd in Gokul and became a skilful musician. On his return to Mathura, he slayed Kansa and restored his father to power.