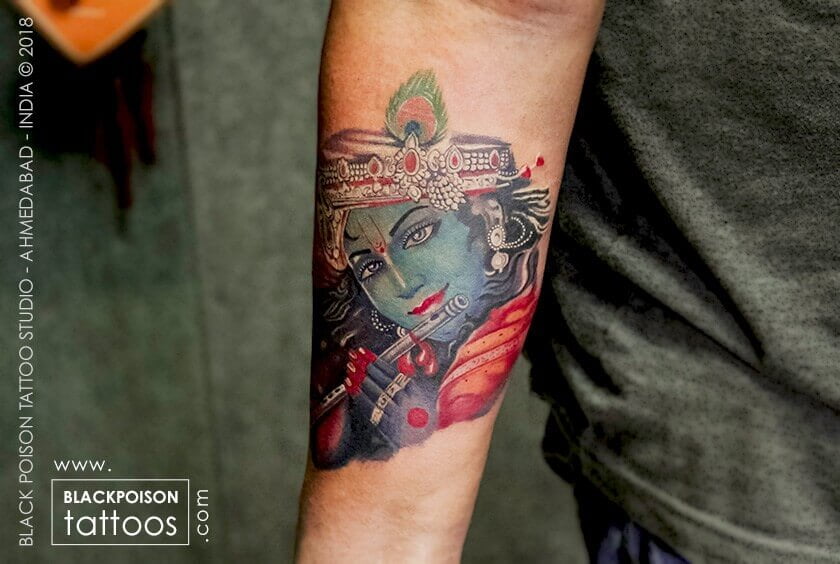 A child, a brother, a charioteer, a warrior, a disciple, a guru, a cowherd, a messenger, the beloved of the gopis… Throughout his life, Krishna enacted so many roles—the whole time never forgetting. That they were just that, roles, and that his true nature was eternal, ever blissful consciousness. In this way, he was able to remain detached and thus perform flawlessly, never allowing the smile to fall from his face.

“There have been very few who have been able to rejoice both in victory and in defeat,”

Amma says. “Sri Krishna is one who celebrated both life and death. That is why he was always able to give a big smile.

He took birth with a smile on his face, lived with a smile, and left his body with a smile. The message that he conveyed through his life is that we should make life full of laughter.”

Krishna’s life was so full, it would be impossible to recount it all here. It is told primarily through Srimad Bhagavatam, Garga Samhita, Visnu Purana, Brahmavaivarta Purana, Mahabharata, Harivamsa and several other Puranas. However, here are some of the broad strokes.

Krishna, in fact, took birth in a prison cell. A sage had told his egoistic uncle, King Kamsa, that he would be killed by his sister Devaki’s child. So Kamsa imprisoned Devaki and had each child she bore murdered. However, Devaki, and her husband, Vasudeva, finally were able to sneak one child off to safety. This was Sri Krishna. They sent Krishna off to Vraja, where he was raised by a foster mother, Yasoda. It was in Vrindavan, one of the villages of Vraja, that Krishna won the hearts of the gopis, the cowherds of the village. “By spending all his time with the gopis of Vrindavan—playing with them, joking with them, stealing their butter and milk, etc—what he actually was doing was stealing their hearts,” Amma says. It is from this that Krishna was given the name “Chitta Chora” [one who steals the mind].