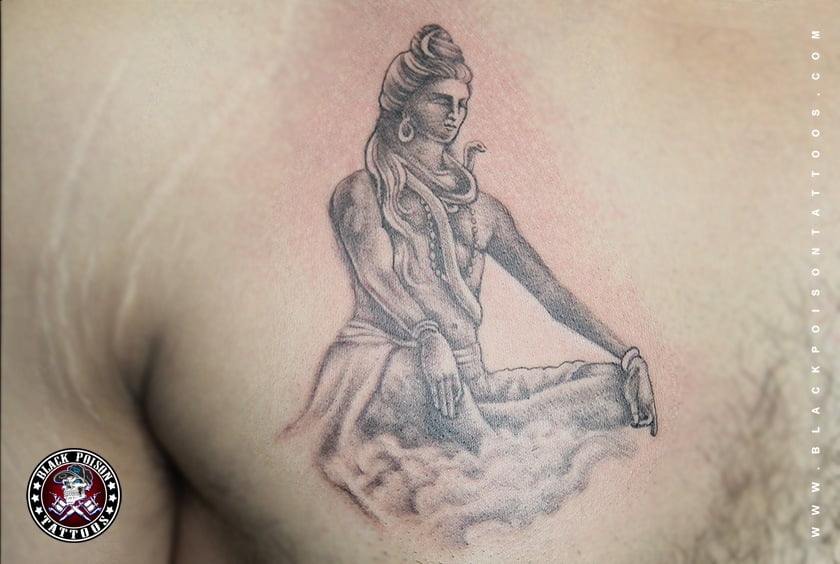 Tattoo of Lord Shiva in Meditation

According to Hindu mythology, Lord Shiva is the Destroyer in the Holy Trinity, the others being Brahma the Creator and Vishnu the Preserver. He has always fascinated his followers by his unique appearance – he has not two but three eyes, has ash smeared all over his body, leads a wild life away from social pretences, and is known for his proverbial anger…but not many know the story about how he was born…

So, how was Shiva born?

There is a very interesting story behind the birth of Lord Shiva. One day, Brahma and Vishnu were both arguing about which of them was more powerful. Right then, one great blazing pillar appeared, whose roots and branches extended into the earth and sky, beyond view.

Both Brahma and Vishnu set out to locate the start and end of that pillar. Brahma turned into a goose and flew up to find the top of the pillar, while Vishnu turned into a boar and dug into the earth to look for its roots. After their unsuccessful attempt, both came back to find Lord Shiva emerging from an opening in the pillar. Recognising Shiva’s great power, they both accepted that besides them, there was a third power ruling over the universe.

But Lord Shiva is no ordinary god. He is a very complex god, having many roles to play and possessing immense power. His favourite haunt are cemeteriesand his favourite dress code is a headdress of snakes and a necklace of skulls. He is accompanied by a band of terrifying looking demons, who are blood-thirsty as well.

Though Shiva is known better as a ferocious god, he has another side too – he is known to spend long periods of time in deep meditation in the lofty Himalayas.