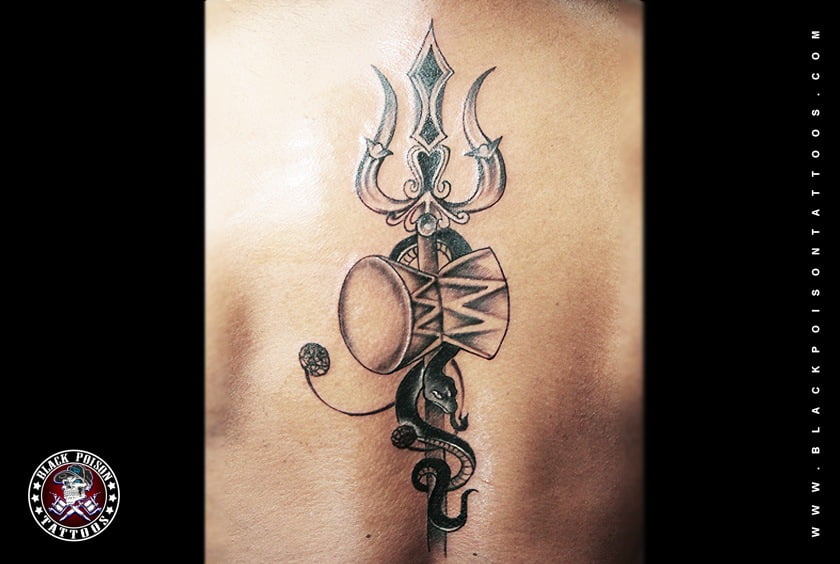 Trishula Tattoo Designs – The Trishula is the three-pronged weapon and emblem of Shiva, the Hindu god of destruction. Also spelled, ‘trishul’ or ‘trisula’, it comes from the Sanskrit language where tri means ‘three’ and shula means ‘spear’.

The Trishula has come to symbolize several important ‘triads’. First, there is the Hindu trinity of deities – Brahma, Vishnu and Shiva. It also stands for the aspects and powers associated with these gods — Creation, Preservation and Destruction.

The three feminine (shakti) powers of will, action, and wisdom are also symbolized by the Trishula.

Three more symbols of the design are desire, will, and love.

Not to be overlooked, are the the trishula design’s potent symbolism of past, present and future. In Buddhism, the Trishula is symbolic of the Three Jewels – right knowledge, right belief, right action. In the Tibetan tradition, it is a magical weapon carried by the protective deities in their battles with evil forces.

As a weapon it is also associated with the goddess, Durga, one of Shiva’s many consorts. She brandishes it in one of her seven hands as she ferociously takes on enemy demons. A Hindu myth describes Shiva striking his son with the trishula, the power of the weapon so great that it sent the lad’s head flying so far it could not be found.