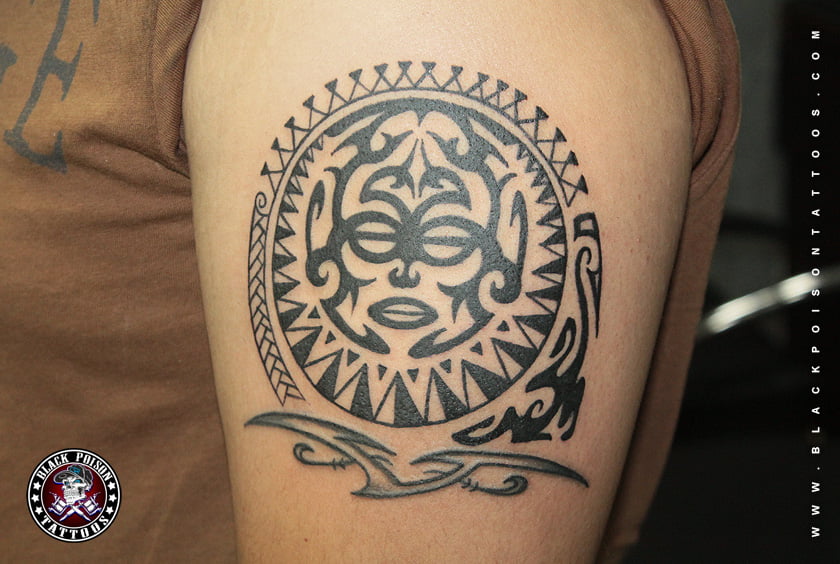 The use of tattoos as a form of body adornment is not something recent but has been a part of human culture and existence for centuries now. When we talk of tattoo art in ancient context, it would be hard to skip Polynesian tattoos because many of the tattoo designs used in modern tattoo art have their roots in the Polynesian islands. The ancient history dating back to centuries makes these tattoos even more interesting and alluring. In those times, getting Polynesian tattoos meant a great deal of pain and endurance and this in no way, waned the popularity of these tattoos amongst the people of these island and the tattoos still enjoy a great deal of popularity. Tattoos were in fact a part of the culture of these islands and they were something necessary for the natives belonging to the tribes which resided in the islands of Samoa, Tonga, Tahiti, Easter Island, the Marquesa Islands, the Cook Islands, New Zealand and Hawaii, all of which come under Polynesian Islands.

Basically, Polynesian tattoos varied in symbolic meanings depending upon the culture of the island they came from, with each island having its own customs and traditions. In general, these tattoos symbolized courage and sexual attractiveness. Some people took them as a symbol of the rite of passage, while others took them as a protective talisman. Getting these tattoos needed a lot of pain bearing endurance which linked them with strength and courage. Polynesian tattoos stood for the social rank and status of the bearer.

Polynesia comprises of more than 1000 islands spread out in the Pacific Ocean, with each island having its distinct culture and customs. As a result, the tattoo designs and their symbolic values too vary from one place to another. Here are some meanings of Polynesian tattoos based on the culture of their place of origin:

It is believed that the first tribal people of Polynesia came to the Marquesa Islands and it is from here that they spread around to various other Polynesian Islands. As such, tattoos were an important part of the culture of the Marquesa Islands and they were specifically borne for aesthetic purposes. People had tattoos inked to appear more attractive and at the same time, they marked the rites of passage through different phases of life.

In Hawaiian culture, tattoos were considered to be more personalized in nature, with respect to the fact that they conveyed a meaning related to the bearer. Another purpose of tattoos in this culture was that they were considered as a protective talisman, besides being a way of embellishing one’s body. Some people bore the tattoos as a mark of honor of a deceased loved one. The most popular Hawaiian tattoo designs included the abstract tribal patterns, flowers and turtles.

In Samoa, tattoos were meant to signify the social status of the bearer, with large sized tattoos being sported by men and women. Since the tattoos were large and intricate, narrating everything about a person, from his age to his social standing, rank and place in life. Getting them inked was a matter of great pain and endurance as they were ink with the tooth of a pig or shark rather than a needle. It was essential to have the tattoo completed once it was started, otherwise it was a matter of disgrace for the tattoo bearer. The Samoan tattoos for men were big in size reaching from below the rib cage to the ankles, and they are called pe’a. On the other hand, the feminine tattoos or malu, were large in size but lacked the black areas. Most of the Samoan women have tattoos inked on their hands.

The Maori Tattoos of New Zealand

New Zealand is inhabited by the Maori Tribe and these people are famous for creating a unique style in tattoo art. The designs comprise of spirals and each design is modified as the bearer passes though a new stage in life. This is like a ritual in which a design is changed with the passage of time and it may take years and years to attain a complete look. These tattoos stand for courage, strength status and passion of the bearer.

Tahiti is also known by the name of French Polynesia and in this island, only people of high social status had the right to be inked. These tattoos were spread over the entire body of the bearer, with the exception of the face area. Both men and women had these tattoos and they symbolized passage of various stages of human existence. Women were inked at a young aged and these tattoos were modified as they got mature. Tattoos played a key role for a woman to attract a partner.

In the culture of Easter Island, it was believed that the body of a person becomes sacred once it is inked with tattoos and he is able to communicate with the divine. These tattoos were borne by both men and women and the most common design was that constituting of dots and lines extending from one ear to the other, covering the forehead of the bearer. Other elements used in Easter Island tattoos included spears, boats, birds and turtles.

Tonga tattoos are very similar to Samoan tattoos in the respect that they had a story to narrate, including personal facts about the bearer such as his age, social status and his journey through life. These tattoos are more like the life story of the tattoo bearer, rather than a form of body art.

Cook Island tattoos comprised of large designs which covered the entire body of the bearer. Each tribe had its own designs and the bearer had a design of his tribe inked on his body.

In addition to the tattoos mentioned above, which related to the cultures of the tribes which they came from, another popular form of Polynesian tattoos is the Tiki tattoo art. Tiki was the first human being according to Polynesian belief and most of the temples of the Polynesia have a statue of this mythical ancestor. The face and hand of Tiki statues are adorned with distinctive Tiki tattoos.

Despite being a figment of the ancient past, Polynesian tattoos continue to rule the world in terms of popularity and are loved by those tattoo lovers who are particularly in love with history and tradition. They represent a journey through the rich past and have a matchless charm, very different from the contemporary tattoos. Such is their attraction value, that many global celebrities have been seen sporting tattoos rooted in the ancient Polynesian art. One of these celebrities is Dwayne Johnson aka The Rock, whose left shoulder is adorned with a Marquesan tattoo. Despite having crossed centuries in their journey, Polynesian tattoos continue to attract the attention of tattoo bearers as well as artists around the world because of their amazing aesthetic beauty and great symbolic value. In those times, tattoos were used to denote social status but today, they are revered because of their good looks and unique designs.