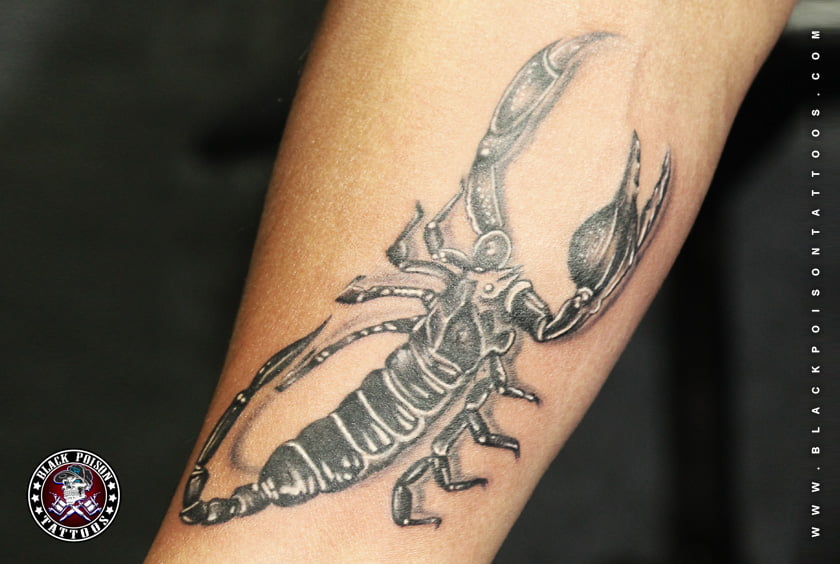 For a tattoo that has a lot of attitude, history and lore, consider the myriad of scorpion tattoos available. The scorpion carries with it a storied history. You might be interested in a scorpion tattoo because Scorpio is your zodiac sign or because you enjoy the dark and foreboding sense that scorpions give. Perhaps it’s just because they look cool.

Scorpion tattoos can be dark and forbidding, but they can also be a lot more attractive than you might think. These tiny, deadly desert creatures – in appearance, a cross between a spider and a tiny lobster – have gracefully curved bodies that lend themselves well to tattoo designs.

A scorpion tattoo can look exotic and intriguing on a man or a woman – all in all, a great image for someone who wants a tattoo with a little bit of ‘edge’, or one that is a little beyond the ordinary.

Scorpion tattoos can be large or small, and they can have as much or as little detail as you’d like. In any case, it will be immediately recognizable – because even those of us who have never seen an actual scorpion seem to have an innate recognition of the symbol and all that it represents.

Scorpion Tattoos And Their Meaning

Scorpion art is part of the folklore and symbolism of many different cultures and has various meanings:

The scorpion is featured in its own mythological tale. When Orion, a giant who was more than human but less than a God, incurred the wrath of Artemis, she called upon a scorpion to attack him. The scorpion’s sting made Orion immortal in the form of the constellation of Orion.

Another story goes that when Medusa was slain by Perseus, the blood that leaked out of Medusa’s neck turned into snakes and scorpions.

The Bible uses the story of Israelites trampling scorpions as a metaphor for achieving victory over the terrible acts brought on by the devil.

There was an Egyptian scorpion goddess that was thought to help ease the pain of childbirth (if women prayed to her appropriately). The scorpion, therefore, stood a lasting symbol of maternal sacrifice.

The scorpion was also associated with the ancient Egyptian god of the desert, called Set.

Because the scorpion numbs its prey before stinging, the ancient Mayans associated the scorpion with surgery.

The scorpion is the symbol of Durango, a state in Mexico.

Scorpions were found in designs on sword handles and amulets in Tibet and a variety of other Buddhist cultures.