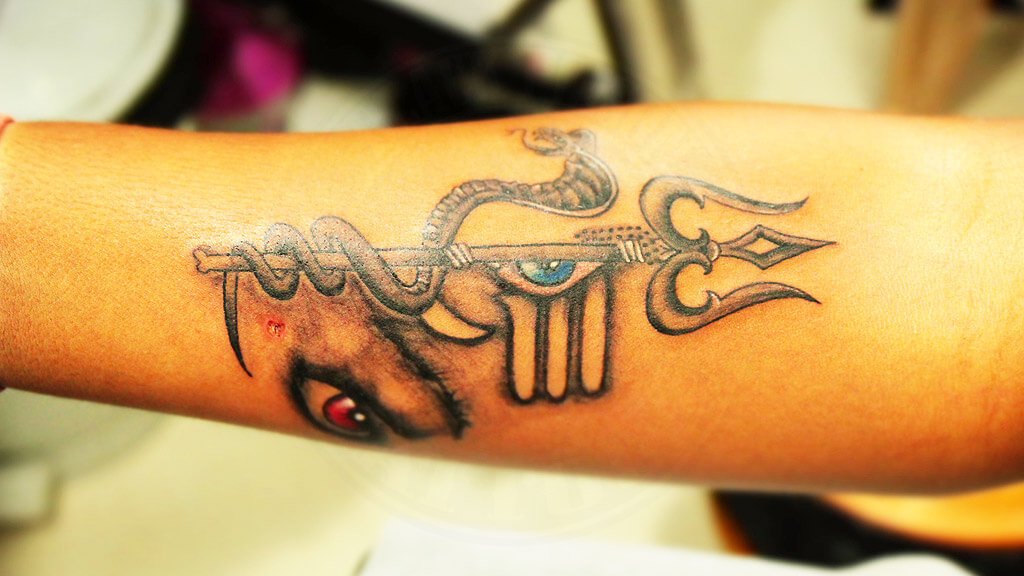 Shiva tattoos, like the Hindu deity himself, generally consist of complex symbolism.

Shiva – sometimes referred to as Siwa or Siva – represents the duality of existence, both the creation of life and the destruction of it.

He is also said to be the image of sensuality and is sometimes depicted as having both male and female characteristics – expounding further on the manifold nature of life.

In addition to that, Shiva is also thought to be freer of souls and is often used in art to express a sort of opening up of the spirit. Despite the rich amount of symbolism associated with this god, many people like to use his image in tattoo art solely for its remarkable, uncanny beauty.

Most people who choose Shiva tattoos prefer to stick with traditional imagery. These pieces are usually quite colorful and detailed, showing the deity either sitting or dancing, alone or beside his eternal wife – the Mother goddess – Parvati.

Many of these pieces show Shiva in full body, usually in a state of fluid movement; however, others may depict the god from the waist up, showing the face, torso, and arms in great detail. Traditional styles may also be done in black or red outlines and may depict Shiva standing bare against the skin, or standing atop a lotus flower, surrounded by flames.

Some people like to use non-traditional imagery for their Shiva tattoos. One great example of this would be to play up the features of both genders, making one side curvaceous, soft and feminine, while the other side is straighter, muscular, and more masculine. It is not uncommon to see a Shiva tattoo that shows the god expressing both sides of his nature.

For example, his countenance may be peaceful, while the manner of his body may be harsh; conversely, his mouth may be presented in a twisted scream, while his body stands in a placid fashion.

Non-traditional Shiva pieces may also exaggerate certain features, like a ray of a yellow sun may burst forth from the right eye, silvery light from the left, and red flames from the center; the snake, which coils around his neck three times, may fade into colors that represent past, present, and future – such as gold, red and blue; while his hands, which are representative of the four cardinal directions, may point towards significant areas in each direction.

To the Hindu population, the image of this particular deity is thought to be incredibly potent; however, as the western culture becomes more enlightened in the ways of Eastern religion, Shiva tattoos are gaining in popularity. This is not surprising, as the visage of this god is not only stunning in appearance but full of promising symbolism.

We have a huge portfolio of Shiva Tattoos.