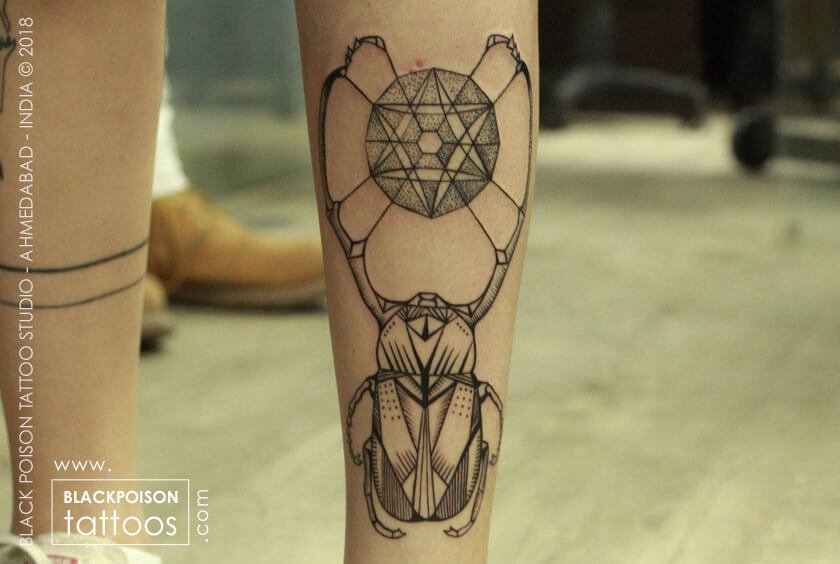 Beetles have also caught the eye, and prayers, of those people seeking Divine intervention. By far, the most well-known beetle to grace the surface of religious artifacts is the Scarab Beetle. Known as ‘The Creator’ or ‘The Khepri’ in ancient Egypt, Scarab Beetles were believed to be a representation of the Sun God and the way they rolled their dung ball across the hot desert sands was said to be a cosmic re-enactment of the ancient Sun god, Atum, pushing the sun across the vast sky.

The Egyptian name for the Scarab Beetle (Kheper) translates into ‘to come into existence and transform’and their connection with the Divine accounts for why important Egyptians like pharaohs and noblemen were buried lots of Scarab Beetles and their tomb walls were filled with images of the insect in its spiritual quest to ‘push the Sun across the sky’.

Bejeweled Scarabs were wrapped in the mummified pharaoh’s bandages in the belief that this would help him to reawaken in the land of the Dead and start his journey towards resurrection.

Outside of the Egyptian spiritual realm, beetles became renowned as signs of good fortune. Ladybugs are common characters in children’s stories and play. Many non-profits that promote tolerance and peace use the image of an adorable Ladybug to easily convey their message. Who knows, it might bring your soul mate to you.

The Meaning of Beetle Tattoo Designs

The types of beetles on the face of the Earth are as numerous as the amount of sand on a beach. These include:

From the delicate contours and vibrant colors of the Ladybug to the strong outline of the Scarab Beetle, these tattoos come in all colors and sizes.

Whether or not you add other elements to your design depends largely on the type of beetle you want to on your body.

Scarab Beetle Tattoos
It’s hard to picture ancient Egypt and the famous tombs of her pharaohs. Without the iconic image of the Scarab Beetle. From tomb walls and chariots to official seals, the Scarab Beetle was a reminder of the pharaoh’s divine power to the ordinary citizens. Scarab Beetles are totems of Atum, the creator god and represent a connection to the powerful forces of Creation, Renewal, and Transformation.

Ladybug Tattoos: Ladybugs bring Lady Luck whenever they fly by Legend has it that you’ll have luck and prosperity. If a ladybug lands on you. Ladybug Tattoos represent Love, Luck, and all life’s richest blessings. These tattoos are for Flower Power children and are more often embodiments of your love for Nature.