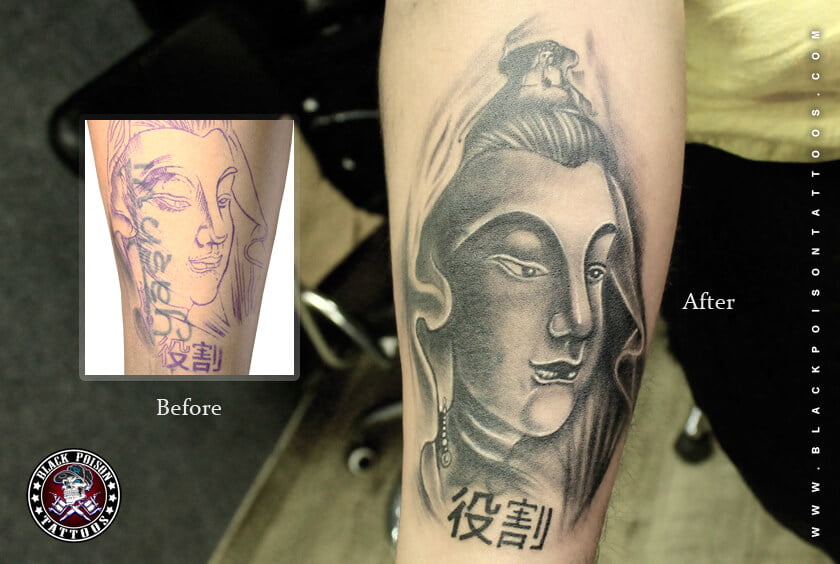 Buddha and Lotus tattoo can symbolize purity. Apart from the message, the 3D effect makes your Buddha tattoo look realistic; a perfect design to wear on your sleeves.

Buddhism is one of the most common and most colorful religions there is in the present world. Within this religions are a variety of traditions and beliefs that followers of Gautama Buddha believe in. But apart from being a religion and a philosophy, Buddhism and Buddha have become one of the most popular subjects in tattoos. We can clearly see the reason why. Buddha tattoos often emanates a sense of peace and serenity. Apart from that, Buddha tattoos are clearly a fantastic choice among religious tattoos.

Buddha tattoos are regarded as sacred and must be inked after a great deal of consideration and careful selection of design as they stand for one’s belief, rather than the beauty and charm normally associated with tattoos. Dragon, phoenix, fish, lion, elephant, wolf, owl, celestial objects stars, moon, birds and many other elements such as flowers, dreamcatchers, feathers, anchors, arrows, compass, musical symbols, heart, infinity symbol, trees can also be used to enhance the Buddha tattoo designs or it depends on the bearer.

Buddha was born as a prince and known by the name of Siddhartha Gautama. Until one day, he decided to renounce all the comforts of his princely life to find the real truth. About human existence, He reached the state of enlightenment by deep meditation. And severe penance and taught his followers the true path to attaining salvation.The image of a Buddha is a representation of the intricate path of Buddhist beliefs and ritual, a tribute to the concepts of universal peace emphasized by the first Buddha, Siddhartha Gautama.

The Laughing Buddha, known as Budai, is a rotund, smiling image of a large, bald man who often carries a cloth sack. Obviously, those who both want a Buddha tattoo and a tattoo that represents luck will probably pick the Laughing Buddha over the others. They could also decide to get it if they are very positive people that love laughter in their lives.

Shakyamuni, the title of the first Buddha, Siddhartha Gautama, is a slender man with curly hair, often depicted in gold or another expensive material. His universal compassion is immediately associated with his image. People who get the Shakyamuni Buddha tattoo often want to emulate Siddhartha in every way that they can. They see doing for others as one of the most fulfilling things in life.

The Buddha is also a representation of protection. The image of Buddha, in this way, serves as a guardian. Protection tattoos come in many forms, but the Buddha tattoo is moving up the ranks. Thanks to the fact that more people are getting larger tattoos these days. Not only that, this Buddha tattoo meaning  is a bit more clear than others, which makes it a great pick for some people.

With all of these very strong Buddha tattoo meanings, it should come as no surprise. That this is a very popular tattoo right now. As is the case with many multi-meaning tattoos. people who get the Buddha tattoo can attach one meaning when they get the tat and more meanings later on. Or, of course, you can decide to get a Buddha tattoo simply because you like the way that it looks and you can find a meaning in it in the future.

Gautama proclaimed the virtue of self-discipline and nonviolence through spiritual meditation. Some people decide to get a Siddhartha Buddha tattoo over other popular Buddha tattoo designs. Buddha stands for the enlightenment which every human being looks for, to adds a new meaning to their life. The image of the face of Buddha makes a wonderful design option in Buddha tattoo. As it represents the ultimate calmness and serenity.