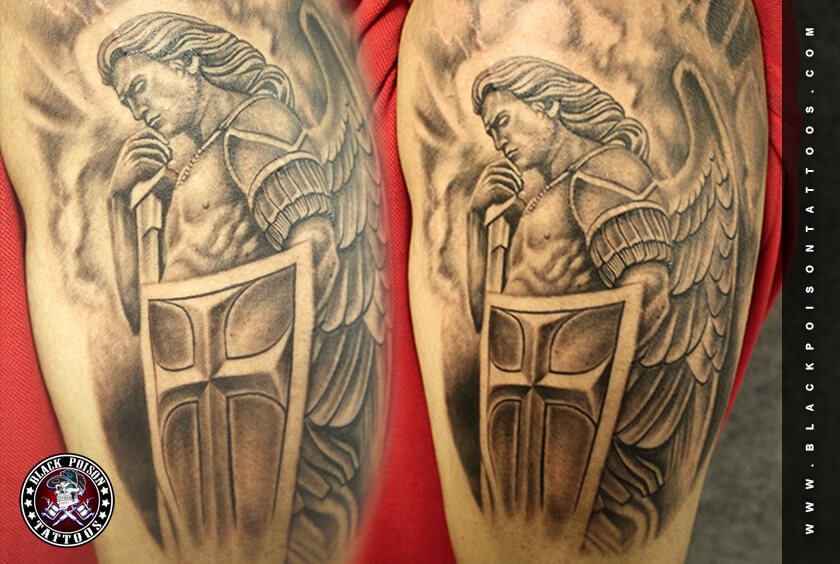 St Michael, known otherwise as Michael the Archangel, can be found fifteen times throughout the Bible. Not to mention, a quick glance in the lexicon and you’ll discover “the name of an archangel and nine Israelites written in Greek and Hebrew dictionaries.

When it comes to Saint Michael, what makes this archangel and prince so popularly renowned?

Well, it starts with the Book of Daniel, where he is referred to as “the great prince who stands up for the children of your people.”

Elsewhere, like in the Book of Revelation, text can found depicting his war in the heavens with Satan’s defeat.

Aside from other places like the Epistle of Jude, you’ll commonly find St Micheal in other forms like prayer.

Take for instance the Prayer to Saint Michael, which came to light back in 1886 by Pope Leo XIII. Years later in 1994, even Pope John Paul II was quite the advocate too.

Yet, when it comes to the meaning of this archangel, you’ll find plenty of inspiration.

When Michael stands guard over Israel, you could say it represents protection. When the Saint opposes Satan, it shows his firm beliefs and willingness to never cower out of fear. In a sense, you could symbolize this an act of bravery. Not to mention, he is also the military commander of certain angels and battles the patron angels of other nations. In other words, the Saint showcases excellent leadership and structure.

God had made Heaven and the Earth and all the Angels and all the extra important Angels,called Archangels. (Like an extra important Bishop is called an Archbishop.) The Archangels were God’s very special friends and were Shining and Strong and Powerful. One Archangel was called Gabriel. He was the one that God sent to tell Our Blessed Lady that She was to become the Mother of God, the Mother of Jesus Christ, our Lord and Savior. Another Angel was called Raphael; he was the one who helped Tobias in the Bible. Another Archangel was called Michael. Michael was “the Angel of the Lord”, who was sent to Moses and Jacob and Abraham and to other people throughout the history of the world. Another Archangel was Lucifer, who was so beautiful that the other Angels called him the Son of the Morning.