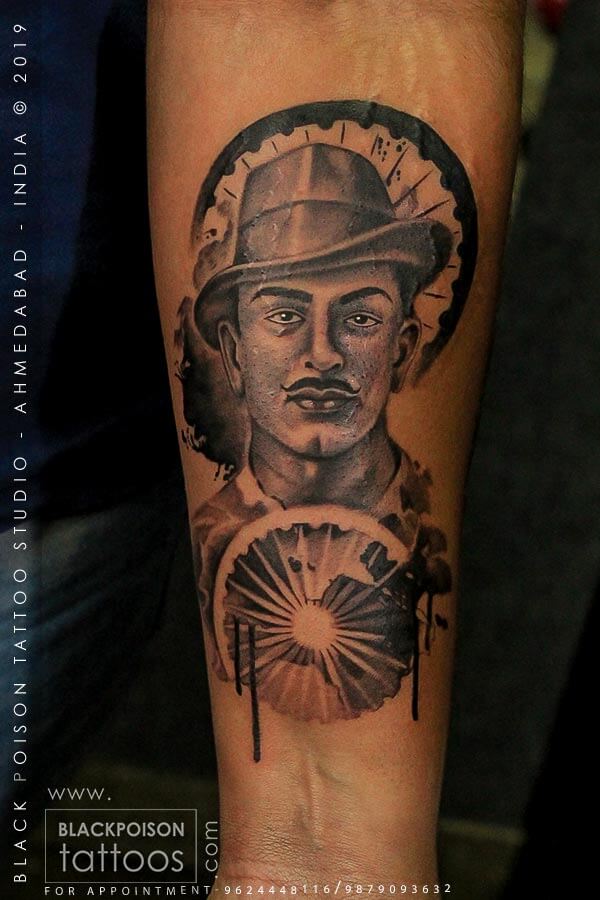 Bhagat Singh Tattoo – He was born to Vidyavati Kaur and Sardar Kisan Singh Sandhu. In a Sikh Jat family on 28 September 1907 in Lyallpur, Punjab in British India. His family had earlier involved in revolutionary activities against the British Raj.

His uncle Swaran Singh had participated in the freedom struggle against the British. When in 1907, another uncle of Bhagat. Ajit Singh was arrested and exiled to Rangoon in Burma (Myanmar), Swaran asked the people of Punjab to force the government for his release and due to his efforts, Ajit Singh was released from Rangoon jail in October 1907.

After coming back from jail, Ajit Singh decided to start a major revolt against the British. He began agitating the farmers and peasants to start a movement against them.

The British came to know of his intentions arrested him on 13 January 1911, when he was attending the Lohri festival celebration at his relative’s house. In February, Ajit Singh escaped from jail and ran away home, only to inform about his planning to start a mass struggle abroad in India. Ajit Singh bid farewell to his family and fled to Iran in March.

In 1912, Bhagat joined the District Primary School in Lyallpur received his elementary education there till class IV.  When he was in 8th standard, the Jallianwala Bagh massacre took place.

The very next day (on 14th April) he went to the bagh telling at his home that he was going to school.

After running about 12 miles from Lahore, Bhagat reached Amritsar. At 2 pm as the boy Bhagat entered the bagh’s compound he saw blood scattered all over the ground. The turbans and torn clothes of people laid lifeless on the ground. The walls of the compound were red with blood. As it was a curfew in Punjab those days, the blood hadn’t been cleaned. Bhagat had taken a glass bottle with him before leaving from home. He took a handful of blood-stained soil and put it in the bottle. He reached home and put the bottle on in front of the Sikh gurus portrait and prayed to him for peace and solace for the victims of the massacre and he pledged to teach the British a lesson.

In 1920, Mahatma Gandhi launched the Non-cooperation movement to encourage a mass protest against the British and to boycott their trade in India, and to end their cooperation with British rule. Many people joined the movement and discarded the use of foreign goods and clothes. The people boycotted schools and colleges. The factories, industries, shops & hospitals run by the government were all boycotted. Many students who left British schools joined Indian schools.

Bhagat Singh actively participated in the movement. He along with a group of people used to burn foreign clothes publicly. And used to boycott foreign schools, he was only 13 years old.

In February 1922, In Chauri Chaura village of Gorakhpur in the United Provinces. Some policemen beat down non-violent protesters going to picket a liquor shop at night.  This created much chaos around the common people as they thought that if Gandhi had not suspended the movement they would have easily gained freedom.