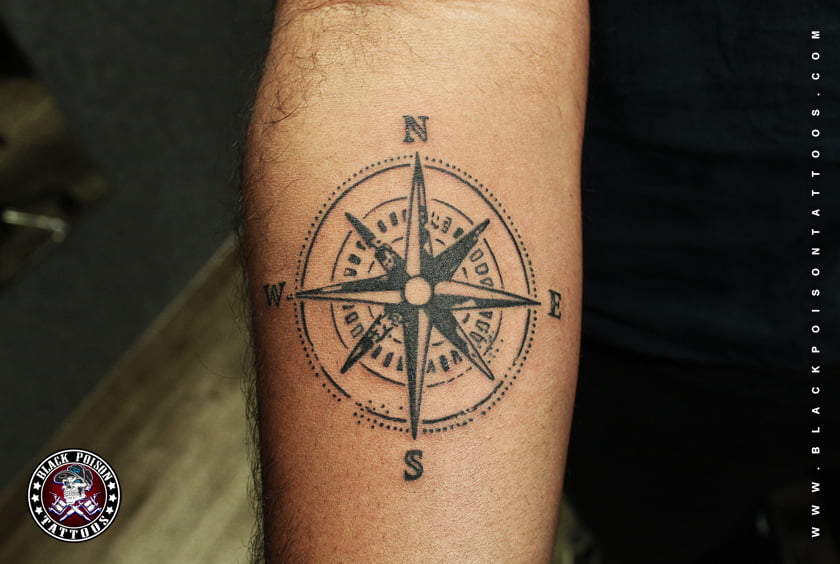 The compass tattoo has been a popular choice among a majority of cultures for centuries. This maritime symbol was popular among early sailors. Getting a compass tattoo would protect them. On rough waters and ensure that you would return home safely.

One of the main reasons sailors opted for this tattoo was that of protection. As a token of good luck, images of compasses painted on the ships as well. The seas were rough and unforgiving. Often times ships and the men onboard would disappear without a trace so these images served as a beacon of hope that they would be guided out of the treacherous waters alive.

Compass tattoos can come in a variety of styles and variations. These include, star compass, astrocompass, lodestone compass, Vegvisir compass and prismatic compass.

The star compass is the most popular of the aforementioned designs and is said to represent the North Star.

Before maps and technology existed, humans used the North Star to guide them in the right direction. Because of this, this style of tattoo stands for guidance, direction and finding a way home.

A way of depicting this is to include an image of a clock or hourglass with the compass in the tattoo design. Maps and earth play a role as well as maps, like compasses, help a user determine their location.

Compass tattoos have also represented the ideal of following one’s dreams. It is symbolic of staying your course in life and to not give up no matter how rough things may seem. The compass will guide you where you need to be.

Overall, this type of tattoo conveys guidance and direction, but you may add additional design elements to your tattoo to have it depict a meaning that is significant to you.