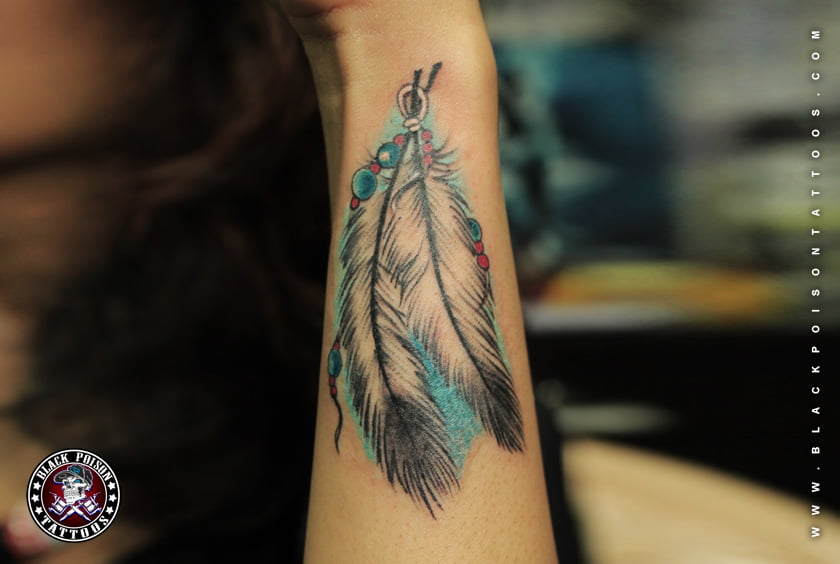 Feather tattoos are equally important among men and women because their symbolic meaning make them relevant for both the sexes. Feathers have commonly been used as tattoo designs since distant past and they have a deep-rooted, significant meaning associated with them, when used as tattoos, both among men and women. These designs continue to be popular and sought-after ones to date, between both sexes. Feathers have always been the object of fascination for human beings, as they are associated with birds, the exquisite flying creatures which stand for freedom, independence, triumph, and liberty, and these tattoos, which incorporate beautiful feather designs, symbolize the power of birds. In fact, feathers can not only add amazing beauty to a tattoo design but also give it an absolutely new meaning and significance for the bearer.

They are all about giving freedom to a person’s individuality and establishing him as an individual in his own right. In Native American culture, feathers were used as a protective talisman, which is the reason why these made an integral part of dreamcatchers, as a hanging on the bottom part, as they were considered effective for trapping bad dreams and negative energies, and providing protection from nightmares. The culture also regarded the feathers as a symbol of nature and revered them for the same reason.

In Native American cultures, feathers represented the spirit of the birds they belonged to and these feathers were used by them in their ritualistic ceremonies, for the purpose of purifying and energizing the environment with their positive spiritual energies. The feathers of different birds had their own different meanings. For instance, eagle feathers were presented to warriors as they stood for bravery and courage, besides having the ability to help the recipient soar high in life, in worldly as well as spiritual sense. This is the reason these tattoos were seen mostly on the bodies of military forces. At the same time, these feathers were of tremendous spiritual value in Native American culture, representing wisdom and spiritual communication.

In some cultures, a fallen feather depicts a departed soul, while others take it as a sign of birth. It is also said that feathers stand for the communication of a person with the departed souls as they convey messages from the spirit world. Christianity has said about feathers being related to great virtues and an image of a signet ring bearing three feathers was symbolic of charity, faith, and hope, with each of the three feathers representing one of these virtues. In ancient Egypt, feathers were used in worshipping the Gods and a feather tattoo stood for the wisdom of the Egyptian Goddess Matt, the Goddess of truth and justice. It was believed that she compared the weight of the heart of the deceased with that of a feather while carrying out the mummification process. If the heart was as light as the feather, the soul was deemed as pure and the spirit was considered fit for further evolution and could move freely into the next phase of the afterlife. According to Celtic mythology, the people with superior powers wore cloaks adorned with feathers for some special ceremonies. In the legend, Morrigon wore a cloak of raven feathers to get transformed into a bird, which gave her the power of higher reasoning to understand the world in a better way. Like feather tattoos, Koi fish tattoos have their own cultural significance and historical background.

Besides the designs of feathers and the birds they come from, the color of the feathers have their symbolic meanings too. For instance, white stands for purity, yellow for smartness, and red for passion. Just like feathers are associated with spiritual heights, liberty, and freedom, feather tattoos are all about dreams, higher intelligence, and spiritually uplifting. They stand for the movement of the soul and the ability to float despite all kinds of obstacles.

As different birds have different types of feathers, there is an equally vast variety available in terms of tattoo designs for people to pick from. But this must be done after proper research about the deeper meaning to be signified by the feather tattoo. Besides the regular design of the feather tattoo, some modifications can go a long way in enhancing its beauty and overall look. There have been examples of the use of vivid colors and adornments such as beads to make these tattoos even more impressive.

Feather tattoos are equally important among men and women because their symbolic meaning makes them relevant for both sexes. While men love to have them adorned because they mean power, freedom, and strength, they look great on women too. When it comes to the exact placement of feather tattoos on the body, there are a number of options where these tattoos can look good. They can be adorned on the back, side, chest, arm, and foot.