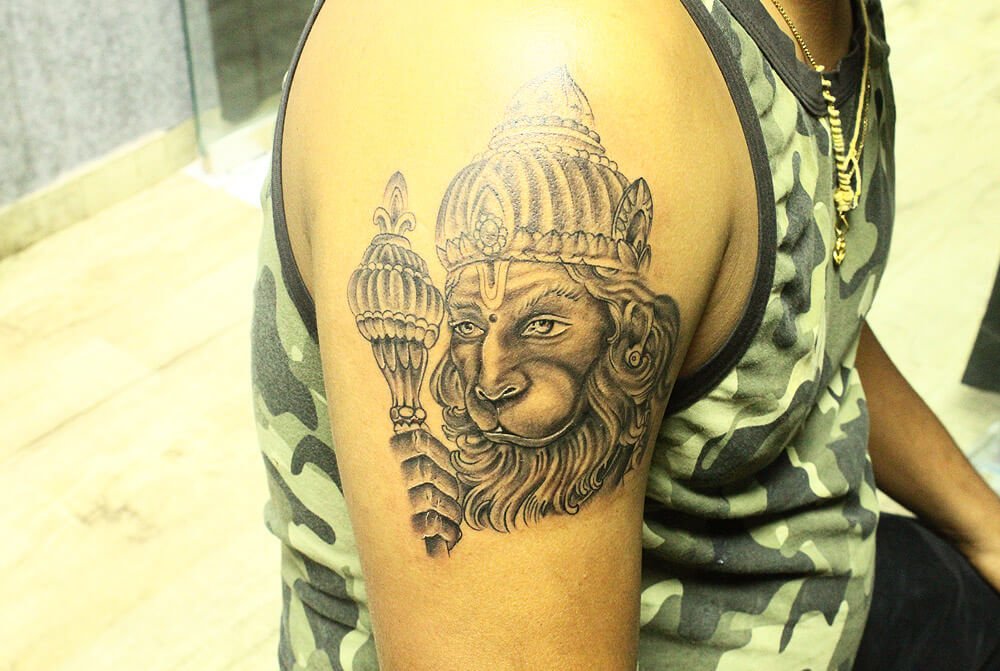 Hanuman the Monkey God – Hanuman, known as the Monkey God, is the Indian deity with the biggest heart. Though his face and tail are that of a monkey, the body is human and covered with white hair. He is a symbol of devotion, not only of the heart, but to learning.

I will get more tattoos ideas from this minimalist tattoos.

His qualities of intelligence and inventiveness are said to be boundless, and no challenge in the world too difficult for him to handle. Employed as a symbol, Hanuman would inspire a person to use their power in the service of the greater good.

A highly respected character in Indian, Chinese, and Thai legend, Hanuman serves as a guard as well as a soldier of God. And to Muay Thai boxers in Thailand, the Hanuman tattoo represents strength, stamina and agility, all attributes of a champion fighter.

In Thailand, the Hanuman tattoo is considered an especially powerful one, and potentially harmful. Buddhist tattoo monks have traditionally applied protective designs to young men, but not before a discussion of what special protection is required.

Hanuman is not readily given out, because it’s said that the effects may be difficult to control. The power of each Thai spiritual tattoo is only released when activated with a spell upon the tattoo’s completion.

According to Indian mythology going back more than two thousand years, Hanuman was devoted to Lord Rama and his wife, Sita. In an act of ultimate loyalty, he tore his heart open to reveal that each of his beloveds lived within it.

Some Indian tribals believe that Hanuman himself was tattooed on one shoulder in order to relieve the pain each time it dislocated.

One legend tells of Hanuman aspiring to become a worthy student of Suriya, the sun deity. To prove his serious intent, Hanuman walked backwards in her presence rather than turn his back on her. As a mischievous child, he tormented the sages at their prayers, and was punished with a curse that caused him to forget he possessed great powers. When prevailed upon by those who needed his aid, however, his strengths returned full force.

The epic known as the Ramayana recounts Hanuman’s many heroic acts, including the rescue of Lord Rama’s wife, Sita. She had been abducted by King Ravana who held her hostage. So devoted was our monkey god that he allowed himself to be captured by Ravana’s troops so he might negotiate a settlement, and at the same time assess the king’s power and weakness.

When that ploy failed, he allowed himself to be recaptured, whereupon they set his tail ablaze. Hanuman confused his startled foes by growing his flaming tail longer and longer, and upon escaping, torched Ravana’s kingdom with his flaming tail.

Where did Hanuman get his monkey features? It depends on which of many versions of Indian scriptures you believe. In some stories, Hanuman was originally a god of the Wind who saved Lord Shiva’s kingdom – the Himalayas – from Ravana’s armies. The defeated king meant to be insulting when he called him a ‘monkey’, so Shiva honoured Hanuman’s heroics by manifesting himself with monkey features, and from then on Hanuman was considered to be a reflection of Shiva.