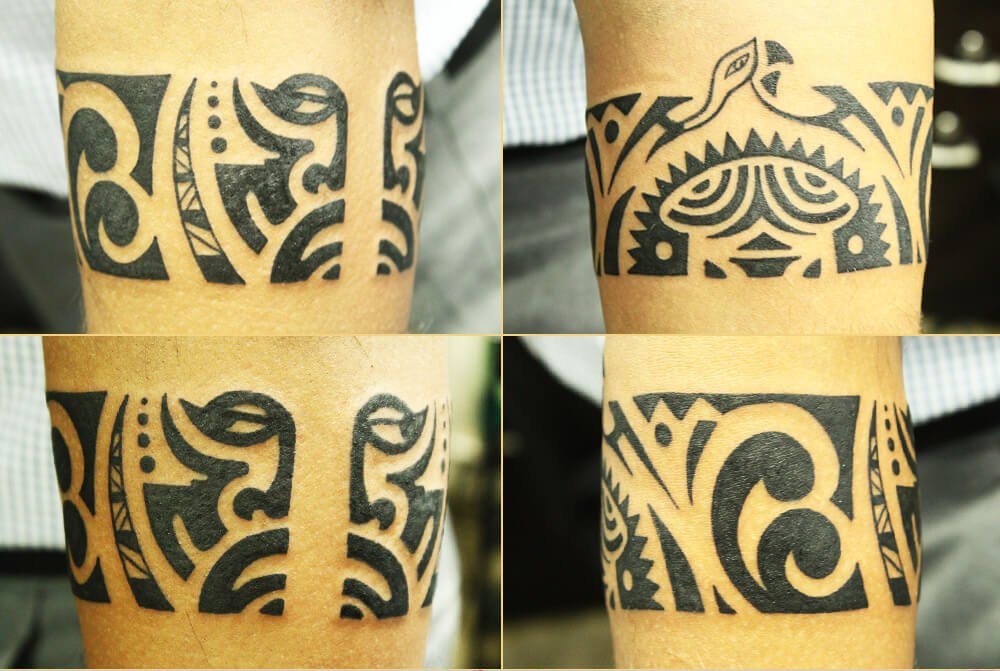 If you are deciding on getting an armband tattoo you are in luck because there are so many options when it comes to this tattoo. Almost any idea that you have can be turned into an armband tattoo. Many people get tribal tattoos, Celtic tattoos and Polynesian tattoos in this area. So if you are thinking about getting a tribal, Celtic or Polynesian tattoo and are unsure of where you want to place it, consider getting this type of tattoo. Some people select an animal that they want to get tattooed and have it go around the arm, like a dragon tattoo which is a good armband tattoo option for men and women. A good armband tattoo idea for women is to get a ring of flowers around the arm. Colorful swirls and stars is another option that looks really nice. If you are a music lover you can have a tattoo of musical notes on a staff circling your arm. Armband tattoos can be thick or they can be skinny, they can be dark or they can be light. The possibilities are endless when it comes to getting an armband tattoo design for both men and women.

When most people think about armband tattoos, they think of it as being in only one place on the arm. Most armband tattoos are found around the bicep or upper arm area. However, it is also very common to get an armband tattoo on the lower arm, just below the elbow. Another location for this tattoo, though not as common as the previous two just mentioned, is around the wrist. Where you place your armband tattoo is up to you as it is all about personal preference any location on the arm can be just as good as any other.

Armband tattoo designs are not known for their meanings. Most people believe that an armband tattoo is simply chosen for its aesthetic value. And this true for the most part. However, there are meanings behind particular armband tattoos that you may not be aware of and can add more depth to your decision, or could make you reconsider getting your chosen tattoo design. For example, the very common barbed wire tattoo and the solid black armband tattoo are actually considered dark and even scary symbols in Russia and Japan, respectively. These symbols were often worn by convicts or mafia-type individuals. The location of where the armband was placed, especially for the Russian barbed wire tattoo, had just as much meaning as the barbed wire tattoo itself. However, the tough history behind armband tattoos can enhance the bad-boy attractiveness of men. On a brighter note, in Hawaii any water-based or themed armband tattoo may represent aboriginal Hawaiian pride. While most armband tattoos are selected solely based on their design, it is also useful to know the meaning behind why certain tattoo designs are chosen for this part of the body.

Armband tattoos are definitely one of the coolest places to get a tattoo. For men especially, they emphasize the bicep which is a highly regarded part of the body in female eyes. This tattoo is a popular option for women as well. Now that you know more about the flexibility this tattoo provides for tattoo design ideas, where this tattoo is most commonly placed on the arm and the meaning behind certain armband tattoos for men, you can start coming up with designs of your own that are unique, interesting, and meaningful.