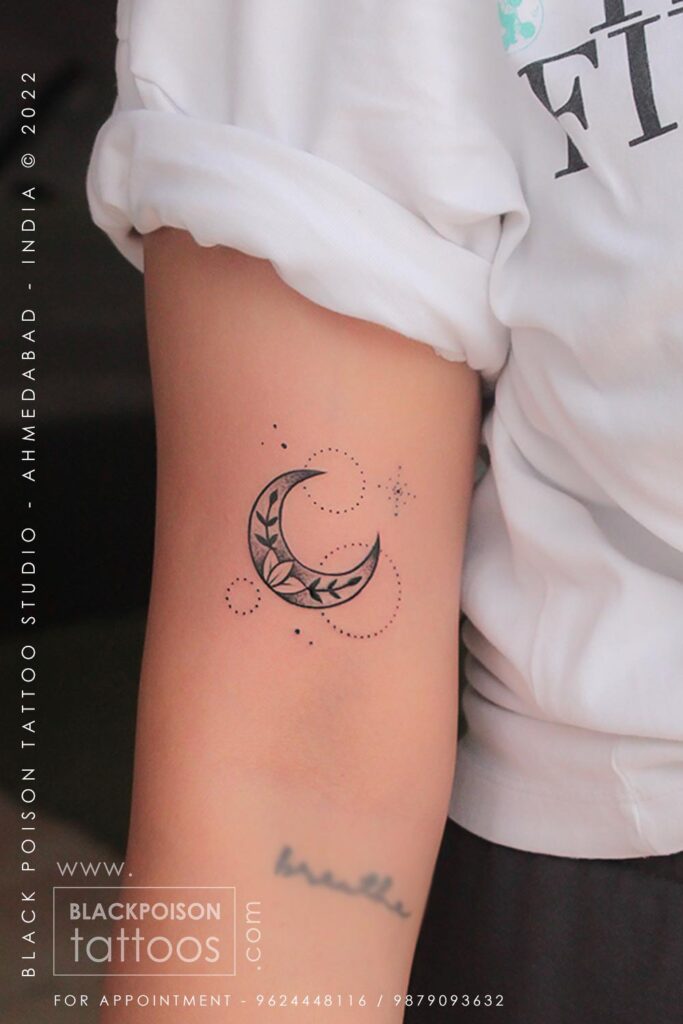 Moon tattoos are one of the most popular tattoo designs in the world. Moon tattoos have a long history of being associated with cosmic deities and goddesses like Artemis, Selene, Isis etc. The moon is an archetypal symbol for many reasons and some people choose to ink their bodies with moon tattoos for various reasons. Moon can represent feminine energy, fertility, balance in life and so on.

Moon is also a distinguished symbol and tattoo designs featuring the moon are considered to be very popular.

The reason for this is that moon tattoos are eye-catching, unique, and simple.

The first thing that makes moon tattoos so distinctive is their simplicity. They don’t have many elements; they’re just a circle with a crescent shape inside it or something like that. Another way that they stand out from other tattoos is their use of color—most people will choose black ink for their moons because it gives them more contrast than other colors do when paired with the dark background of skin (or any other medium).

A Sun and Moon tattoo design represents the two sides of nature and human mind.

The sun and moon are two celestial bodies, which have a huge effect on our lives. Their symbolic meaning is a bit different from culture to culture, but they mostly represent the two sides of nature and human mind.

The sun represents the good side and the moon represents the bad side in many cultures around the world. The sun is considered as a symbol of life, warming up our planet during daytime with its light and energy. While at night we see only half of it: “the dark” side of it or “the new moon” as some people call it. This can also symbolize how our minds work; one day we like something while another day we don’t like it anymore because we change our thoughts about things depending on what happens in everyday life circumstances or situations (good or bad).

In other cultures, such as Ancient Greece for example, where Goddess Artemis was worshiped under both names Artemis-Diana (Moon Goddess) and Phoebe-Selene (Moon Goddess), these celestial bodies were believed that represented both masculine/feminine aspects of nature respectively: Apollo/Artemis being masculine while Selene being feminine counterpart who’s connected with fertility & childbirth throughout ancient times due to her ability give birth every month when visible again after disappearing behind Earth’s shadow during new moon phase

These tattoos could be a creative expression of your individuality as every piece of art that adorns your body has a story behind it.

Tattoos are a permanent mark on your body. They can be a creative expression of your individuality as every piece of art that adorns your body has a story behind it.

Whether you want to get a tattoo because you want to express yourself, represent something in your life or even just make an impression on others by getting one, there are many factors that need to be considered before you decide what type of tattoo is right for you.

Amongst the most popular tattoo designs, moon tattoos have quite a few symbolic meanings, which range from balancing sun’s energy to purity and celebration of fertility.

Amongst the most popular tattoo designs, moon tattoos have quite a few symbolic meanings, which range from balancing sun’s energy to purity and celebration of fertility. The moon is known as the light of night in many cultures and has been associated with magic, mystery and madness since ancient times.

The Chinese believe that the full moon was an aspect of their goddess Chang’e—the goddess who lives on the Moon. They also believed that she would bring good fortune to husbands if they made offerings to her on this day at midnight when all other gods were asleep and resting.

In Norse mythology, there are two major moons: Mani (moon) and Máni (moon). Both are female deities who govern fate and fertility while also representing different aspects of timekeeping. The first one represents night while the second one represents day; this makes them both companions but also rivals since they cannot exist without each other’s existence here on Earth!

It is mostly seen in combination with other elements such as sun, stars or flowers to enhance its appeal and symbolism.

Tats that feature the moon in combination with other elements such as sun, stars or flowers to enhance its appeal and symbolism.

Moon tattoos can also be combined with other elements like stars and flowers. For instance, the combination of moon, sun and stars is popular among tattoo lovers. Another common design consists of a crescent moon along with leafy vines or feathers that appear to grow out of it. This type of design often symbolizes femininity as well as nature’s beauty and mystery.

Both men and women can have moon tattoos inked on themselves as they look good on any part of body like back, arm, leg, etc

Moon tattoos are a popular tattoo design with both men and women.

You can have them inked anywhere on your body like back, arms, legs etc.

The moon can be small or large depending on how you want to look at it.

If you are thinking of getting a moon tattoo, then it would be a good idea to check out the designs available online. You can also talk to your tattoo artist and tell him/her about your preferences so that he/she can come up with some designs for you.